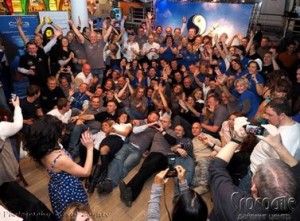 Allan and Alli have returned from the Moscow Dive show, meeting some old friends and new friends. The Crocodile Dive Club which is one of the largest dive Clubs in Moscow celebrated their 20th anniversary and if you look very closely in the photo you see that Alli, Allan and Slava (who has been here several times) were there too. Many thanks to Alexey  Stoyda who showed us around and to Alexandra Zamanaeva from the Crocodile Club for making sure we had a great time that night at the party.