Many people who live and work here have “their story” on how they landed up in Puerto Galera in the first place. It makes for very interesting conversation in the bar, and what you’ll find out quite often is most of us really did not plan on living here. Here is Allan’s story.

How I became a dive resort owner, by Alan Nash

I was formally in Hong Kong working as a construction supervisor and the partner in a nightclub called Rick’s Café. After seven years in HK, I decided I wanted to buy a boat and sail around Asia for a couple of years. I managed to get my masters two and engineer two for costal sailing but had no experience in blue water sailing. I resigned my job and told the company I would see them in two years, went to Hebi Haven yacht club and asked if anyone needed help sailing their boat somewhere in Asia. That’s when I met up with an American guy (Ogle Warfield) with a 42ft Tiana (the Elusive Butterfly) leaving for Puerto Galera, Philippines.

Five days after leaving HK we got sight of the Philippines Islands, and San Fernando. From then on it all went wrong and I had the worst trip you could imagine, typhoon, almost lost the boat on a reef coming into Subic Bay without harbour charts! The owner called a mayday when approaching Subic Bay; I was somewhat disappointed with his decisions. Then he managed to jump into the water with my passport in his pocket, bugger.  After several days in Subic Bay sorting out passports and drying off we headed to Puerto Galera. I arrived in Puerto Galera on the 28th of October, twenty days after leaving HK on October 8, 1985.

Ending up in Puerto Galera I could not wait to get off the boat. I said to myself if this is what it’s like living on a boat, forget it, and went looking for something to do. That’s when I walked into a dive shop called Reef Raiders owned by two Australian’s, Jim Wilson & Neil (Snake) Krumbeck and a German Willi Tobler. The freelance instructor Dave Penman (English) met me when I walked into the dive shop and we quickly became friends. I was already a certified diver, but had not dived for a few years. He took me out on a dive and I just fell in love with the diving all over again and loved the area. So I asked Dave to take me through the PADI Open Water Course again and onward and upward. He did and within two months I was a divemaster working for the Reef Raiders. I became an instructor in March 1987, and worked with Dave as the instructional team for Reef Raiders until May 1988 when a fire ripped through the beach and took the dive shop with it. 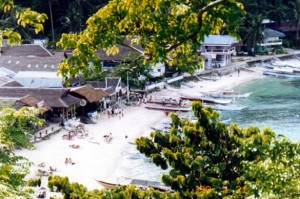 Big Lalaguna in the early days 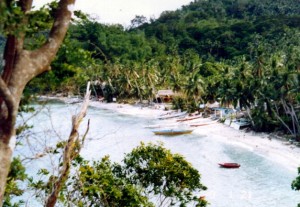 Small Lalaguna in the early days

I never intended to start my own dive shop, but with not having a dive shop to work out of, and not wanting to go back to working in the real world, I suggested to Dave if he would like to start a dive shop since the previous owners had decided they’d had enough and were heading home. Dave agreed and with that, we worked day and night recovering whatever we could from the fire, regulators, charred wet suits that had been saved but left on the beach. Ten tanks were saved as these tanks were rented out the night of the fire, and a handful of masks and fins. Within a week we had borrowed a thousand dollars and purchased a small 2.7cfm compressor, we were up and running. We used the name Reef Rangers until one of the owners of Reef Raiders came back with a Japanese guy and resurrected Reef Raiders, and asked us to change our name. With that I decided on the spot it would be Asia Divers and Asia Divers was born. 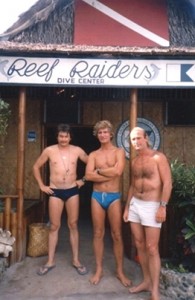 We started Asia Divers (now where Tech Asia Divers Institute stands) in my spare bedroom being the equipment room and used my kitchen and balcony as classrooms and my living room as the bar. After five great years we badly needed our own rooms so in December 1992 we purchased El Galleon dive resort with seven usable rooms and a small restaurant. Today we have 30 rooms, a new kitchen, pool, three bars and an incredible dive platform.

Our family, the team, is as solid as a rock and we do know how to have fun, it’s our pleasure and our job, one that none of us would trade for anything. We love Puerto Galera, the diving and dive industry as a whole and the many new and old friends we meet every day who appreciate that common interest.  We have come a long way and it’s been a great ride! Looking forward to the next 30 ye