“Just seen the article in the newsletter about rhinopias – didn’t realise that they were so rare or such a big deal to spot. I saw a pair of them last year in November. I didn’t have my camera with me but Hugh Moore did. Only 1 of the photos is clear & in focus but I’ve sent the others so that you can see the pair of the fish.” 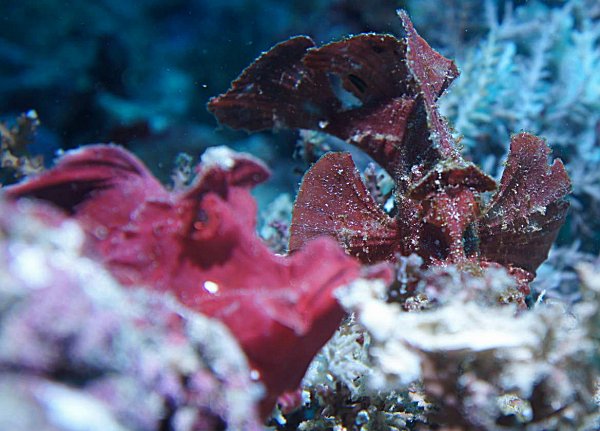 But…the plot thickens! We went out there again and this time we found the second one. So now it’s confirmed that there are two in the area…BUT……IT GETS EVEN BETTER. Pete found another one at a completely different dive site!! So now there are at least three!! Peter Webster from Vision Divers, Melbourne Australia took the photo below. He caught it at just the right moment!

Alli couldn’t believe her eyes as she saw this little tuft of fluff moving along the bottom. With magnifying glass and camera in hand and a bunch of other divers with her, they got to see the extremely rare hairy octopus. It’s a small octopus, reddish brown in colour, covered with long and branching skin filaments, mimicking a tuft of Algae about 2 cm. Supposedly it’s only known to be found in North Sulawesi, but surprise surprise they are here in Puerto Galera too!! It’s been an amazing month for new critter findings in the area. Stuff that is only supposed to be in Lembeh is actually here too.