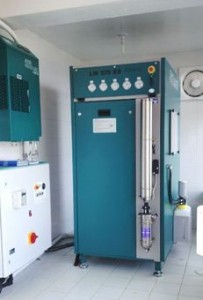 In line with upgrading program in Asia Divers compressor filling station is the first of two new compressors that was installed by Andy Norman to replace two out of four of its aging units.

The newly installed unit is an 570 Ltr/min compressor manufactured in Germany by Lenhardt &Wagner. The unit is sound insulated therefore emitting very little noise and while in operation can hardly be heard from platform or point bar, which makes it a little more satisfying on the ears not to hear the noisy start up or the blow down condensate drains of the old compressors.

Delivering 570 Ltr/min or 20 cubic foot of free air per min roughly translates to filling 20 tanks per hour, its fully automatic for both condensate drains, auto shut and full remote operation from the filling station on the platform.

For filtration and cooler system, the 570 is capable of filling an estimated 3,000 tank fills on one filter change.   Now I guess saying 3,000 tanks does not seem that many tank fills from a single filter cartridge but when considering the recently removed compressors only done 100 tank fills or 10 hours between filter changes you can get to see the first of some real advantages of the new compressor.

Looking forward to 2015 New Years gift of a compressor that is the second and last of the upgrades for the compressor room at Asia Divers Point shop.