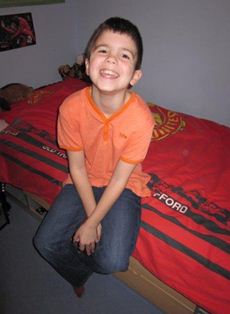 British school boy William Gordon age 10 ½ from Burgess Hill, Sussex has collected GBP600 (almost US$1,000) for Malapascua. Horrified by the televised events shown on UK TV, William bucked the trend at his school last week during the annual Children in Need charity event.

Unlike everyone else who went to school dressed in pyjamas, William was determined to raise money for the Philippines (which of course includes thousands of children) by himself. Not knowing the best way to send the money he rang his Great Auntie – Ali Pockett, frequent visitor to Asia Divers and well versed in Philippine etiquette. Ali P obviously contacted AD and was directed to the plight of Malapascua – an island she has dived together with her partner – IDAP Course Director Kenneth and friends Johan and Maria Lyrevik.

William turned more than a few heads at school and elsewhere by dressing up as a girl for the day (Ali P will take enquiries at Christmas!) and renamed himself “Williamette!”  Thrilled at the response to his unusual technique he unashamedly continued throughout the whole day in his long blond plaits and red shoes and raised money at school, from family, friends and even strangers. Everyone is proud of you William (ette). Well done and thank you!  This money will go a long way to help the people of Malapascua.