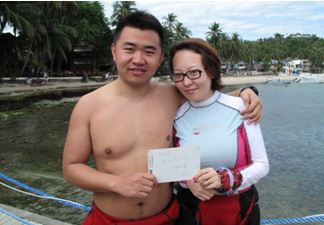 Jikai approached his dive guide, Brad prior to the dive and told him he wanted to propose to his girlfriend Liu Na underwater. So Brad got a slate and Jikai wrote his proposal in it. Towards the end of the dive, Brad handed him the slate and then he showed it to Liu Na. Of course she was surprised, but happily for all she indicated a “YES” and he proceeded to pull out a ring and place it on her hand, all under the watch of Brad and Rob who was filming the whole thing!