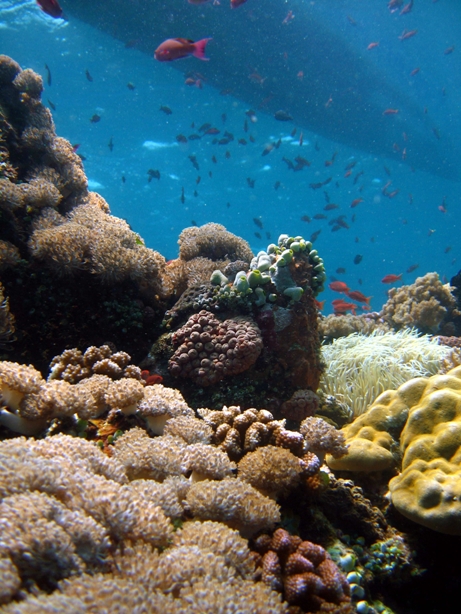 With over 250 dives on the Verde Island pinnacle or San Agapito, as it is called locally, I can still feel like a Verde virgin every time I drop into the pristine turquoise water. My body is encompassed and wrapped in a luscious blanket of warmth, which is teeming with abundant fish life and creatures beyond imagination.  Some days I still have to pinch myself to make sure that I am really experiencing all of this. And this is all in a day’s work…

Experts have called The Verde Island Passage the “centre of the centre” of the world’s marine biodiversity. Life enhancing nutrients from the Pacific mix with waters of the South China Sea. You would never guess that beneath the surface are spectacular reef formations with more than 300 species of corals and underwater rock canyons that host nearly 60 percent of the world’s known shorefish species. The World Conservation Union describes it as the marine counterpart of the Amazon River basin,” which put the passage at the peak of the “Coral Triangle” that spans the Sulawesi and the Sulu Seas in the southern Philippines and nearby Indonesia.

The Verde Island passage is situated between the islands of Luzon and Mindoro, which happens to be my backyard. A trip to Puerto Galera is not complete with at least one visit to Verde Island. Since it only takes 20 minutes by our speedboat, I encourage our divers to get over there early in their stay because no doubt that they will want to go back again. 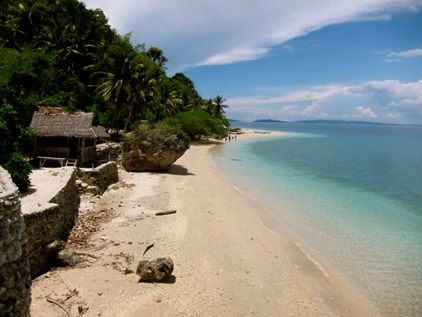 The most well known dive site is the “Verde Island Drop off” or “San Agapito” about 300 meters off shore. Approaching the dive site you are greeted by the rough tips of pinnacles breaking the surface. I imagine that there must have been a few shipwrecks on these over the years! From the surface it doesn’t look like much, but as soon as you drop in, you’ll see that these pinnacles are like the icing on top of large colourful birthday cake.

The Drop Off can be described best as steep slopes with stunning vertical walls that drop down to 70 meters or more. Beautiful gorgonian fans, basket sponges and anemones nestle in and make their home here. Numerous nooks and crannies are home to all sorts of reef life including shrimps, sea snakes, scorpion fish and moray eels. Volcanic bubbles rise up through the corals and create a magical effect. Anthias and red-tooth triggerfish are so abundant that I tell people that there are so many fish on the pinnacle that they’ll have to push them aside to see the reef. 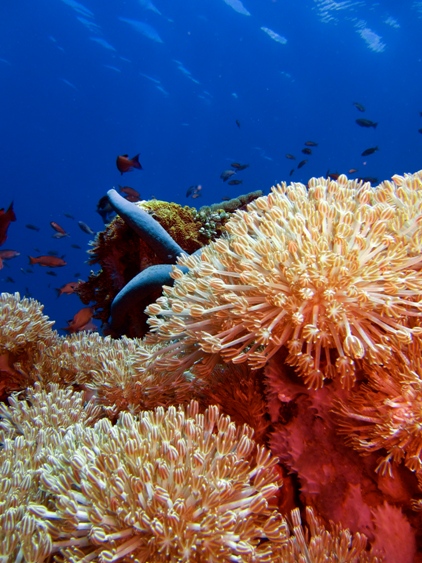 This is one of those dives sites that you can happily use a wide-angle lens or a macro lens and come away with great shots. Since Puerto Galera is known so widely for its macro I sometimes encourage the photographers to pull out their wide-angle lens for a day on Verde to take advantage of the spectacular pinnacles and beautiful gorgonian sea fans. These teamed up with the colourful anemones and reef fishes make an excellent backdrop and are a great area to shoot wide angle. Nudibranches are plentiful and you’re bound to see a gnarly scorpion fish or two, so a macro lens will come in good use as well.

The currents on Verde can be tricky, but going with an experienced guide you can safely manage them. With an experienced group I like to get on to the corner and “watch the show”. This where you have the best chance to see many of the larger fishes including schooling jacks, sweetlips, tuna and snapper all dancing in the current.

A Spanish galleon, the Nuestra Senora dela Vida, which sank in 1620, was discovered in the late seventies just off Verde Island. Unfortunately it was heavily salvaged in the 70’s and 80’s and nothing remains of the wreck except for a few pieces of porcelain. The larger plates and terracotta jars are now long gone. I like to take my divers “treasure hunting” for these little pieces of porcelain during their surface interval. If you walk along the beachfront and look in the sand you can be sure to find a few pieces wash ashore. It’s a nice little souvenir to go home with.

A day trip to Verde Island is a great experience for our guests. They get to dive on a spectacular dive site with prolific fish life, learn a bit of local history and perhaps even go home with a small piece of porcelain treasure.