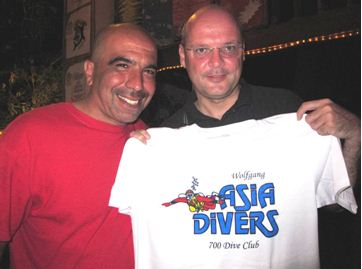 We’re thrilled that Wolfgang Krueger specifically came down this weekend to do his 700th dive with us…and what a dive it was. He spent it on Verde Island and the frogfish came out to play!

Wolfgang’s first dive with Asia Divers was 28 September 2002 to Shark Cave and it was only his 21st dive altogether in his dive career. He’s come a long way since then, and thankfully, a lot of it was with us! To date he’s now got 263 dives in PG, including some Milestone/new t-shirt dives in which were celebrated at the Point in fine style including numbers 50, 200, 300, 500, 600 and 700. Wolfgang has also joined some of our overseas live-aboard trips which included 23 dives in Cocos Island in April 2012, 29 dives in Komodo and Sumbawa for a total of 315 dives with us. His most memorable dive was a bit difficult to choose as he’s had many memorable dives but one of his favorite sites is Oodies because he’s never encountered another group of divers there and it’s a bit difficult to find for most people. Thanks for your support over the years and we look forward to many more dives with you!