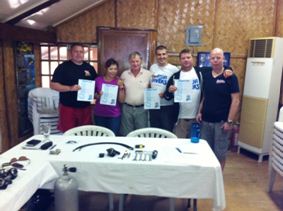 Continuing for 2014, Andy Norman conducted a Cressi Sub service seminar at Asia Divers in Puerto Galera on 30th January for students just finishing IDAP courses or were previously qualified instructors through IDAP that wanted to know more knowledge and theory of regulators.

With all students except Mark Walton, remaining students started the day with very little understanding or operation of how regulators actually worked. However, by the end of the day all had easily grasped the full understanding of both the unbalanced piston and diaphragm regulator theory extremely well, that dispelled any idea as to why people think they are so
complicated…

Anyhow, the course was real fun to conduct, but noted was the seriousness of how regulators were stripped apart, inspected and rebuilt in a proper fashion was an important part of the course.   The fun side the course was actually to listen to the questions and feedback with the enlightenment that they were able to understand the theory with ease… Honest, it’s not rocket
science. 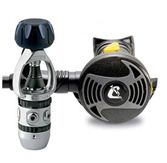 Once again the regulators used were Cressi-sub AC2 unbalanced regulator with its XS 2nd stage. This is a great regulator for both rental and personal use; that due to its simple design, is well known for being a workhorse within the regulator family. Noted to students, this piston regulator was one of the few 1st stages on the market that IP could be adjusted externally, therefore making it very easy to service and do fine tuning adjustments.

For the afternoon session, the diaphragm MC5 coupled to the Ellipse was used for strip down, working theory, rebuild and fine tuning and then to finish off was theory on BCD inflation devices…Cressi Sub has introduced an additional 2nd Stage and that’s named the “Compact” regulator. This regulator is very light and relatively small and will be introduced into the Cressi-sub service seminar as part of the fully authorized course.

If wanting to know more about Cressi-sub service courses that are held at regular intervals throughout the year, please contact Andy Norman on: andy@asiadives.com