While the sponsored head shaving has been a huge success for typhoon fund raising, hardly a surprise as anyone sitting in the Point Bar is going to be fully aware of the crisis in the central Philippines and likely to donate, there have also been some very committed efforts elsewhere.

Dave Ross’s sister Tracy was in touch from the UK for ideas on how to help out, and get around the unfortunate notion that every single cent given to Philippine Charities gets pilfered. Something that can put a block on people overseas being willing to donate actual money.  Goods and clothing are another matter though and she got stuck into the staff at her son’s school, The Westgate School in Winchester, who mobilized the troops for a clothing donation drive that resulted quickly in this mound of plastic bags in Tracy’s back yard. 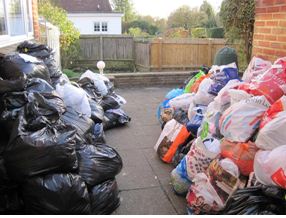 Having collected it, Tracy and willing neighbours then had the job of boxing it up for shipping to handle, weeding out some of the more misguided donated things along the way. Football boots, some of the more adventurous women’s under underfashions, and welly boots being among the things that won’t make it into the final batch of 51 boxes that will leave the UK soon.

Many thanks to the school and all that contributed, and especially Tracy for having the energy to put everything together!