Even though this is not about the Philippines, I thought that anyone who is interested in Scuba diving would be interested in this.

Introduced to life under the sea in high school through snorkelling, Yoji Ookata obtained his scuba license at the age of 21. At the same time, he went out and bought a brand new NIKONOS, a 35mm film camera specifically designed for underwater photography. He devoted all his spare time – aside from his day job – to perfecting his art of underwater photography. Then, at age 39, he finally made the transition. He quit his office job and became a freelance underwater photographer.  But even for a man who spent the last 50 years immersed in the underwater world of sea life, the ocean proved infinitely mysterious. While diving in the semi-tropical region of Amami Oshima, roughly 80 ft below sea level, Ookata spotted something he had never seen. And as it turned out, no one else had seen it before either. 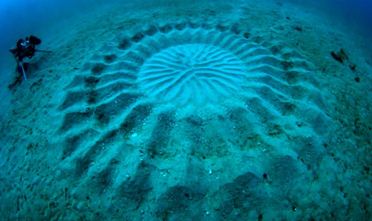 On the seabed a geometric, circular structure measuring roughly 6.5 ft in diameter had been precisely carved from sand. It consisted of multiple ridges, symmetrically jutting out from the center, and appeared to be the work of an underwater artist, carefully working with tools. For its resemblance to crop circles, Ookata dubbed his new finding a “mystery circle,” and enlisted some colleagues at NHK to help him investigate. In a television episode that aired last week titled “The Discovery of a Century: Deep Sea Mystery Circle,” the television crew revealed their findings and the unknown artist was unmasked. 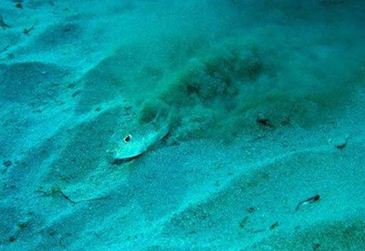 Underwater cameras showed that the artist was a small puffer fish who, using only his flapping fin, tirelessly worked day and night to carve the circular ridges. The unlikely artist – best known in Japan as a delicacy, albeit a potentially poisonous one – even takes small shells, cracks them, and lines the inner grooves of his sculpture as if decorating his piece. Further observation revealed that this “mysterious circle” was not just there to make the ocean floor look pretty. Attracted by the grooves and ridges, female puffer fish would find their way along the dark seabed to the male puffer fish where they would mate and lay eggs in the center of the circle. In fact, the scientists observed that the more ridges the circle contained, the more likely it was that the female would mate with the male. The little sea shells weren’t just in vain either. The observers believe that they serve as vital nutrients to the eggs as they hatch, and to the newborns.

What was fascinating was that the fish’s sculpture played another role. Through experiments back at their lab, the scientists showed that the grooves and ridges of the sculpture helped neutralize currents, protecting the eggs from being tossed around and potentially exposing them to predators. It was a true story of love, craftsmanship and the desire to pass on descendants.