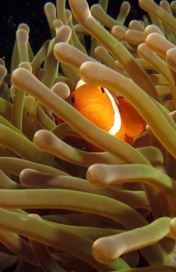 Last month I noticed that there were many clown fish eggs appearing in one week over several different dive sites.  This intrigued me and made me want to look into this a bit deeper and find out why. I noticed this more just after the full moon which this time was known as a Super Moon! I was wondering if this is the time that eggs are laid? Hmmmm….So searching around on the internet I found out some interesting facts about our little orange buddies.

Where do Clownfish Live?

Clownfish live at the bottom of the sea in sheltered reefs or in shallow lagoons, usually in pairs. Clownfish have a special relationship with the anemone and are very important to them. They are a large help to the anemone as they clean the anemone by eating the algae and other food leftovers on them. They also protect the sea anemones by chasing away polyp-eating fish, such as the butterfly fish.

They live in the warmer waters of the Pacific Ocean and Indian Ocean. They are also found in northwest Australia, Southeast Asia, Japan and the Indo-Malaysian region. Did you know that there are no clownfish in the Caribbean?!

What is the Life Cycle of the Clownfish? 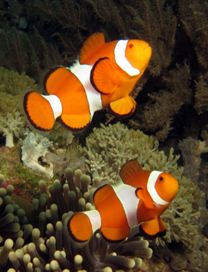 The spawning season of the clownfish, a time when they breed, is year round in tropical waters. Males attract the females by courting. Courting behaviors include chasing, biting and extending fins. Clownfish lay their eggs in batches on coral, rock or next to the sea anemone that they call home. The male clownfish will build a nest on the rock or coral near the anemone in order to be provided with protection from predators. Breeding starts by the male chasing the female to the nest where the eggs are released. One hundred to one thousand eggs are laid. The male clownfish guards and protects the eggs until they hatch. They hatch within 4 to 5 days.

What are Some Special Characteristics of the Clownfish?

In a group of clownfish, there is a strict hierarchy of dominance. The largest and most aggressive female is found at the top. Only two clownfish, a male and a female, in a group reproduce through external fertilization. The clownfish are hermaphrodites, meaning that they develop into males first, and when they mature, they become females. Also, as mentioned earlier, more than one clownfish is able to live in a sea anemone. If the female clownfish is removed from the group, such as by death, one of the largest and most dominant males would become a female. The rest of the remaining males will move up a rank on the hierarchy.

Clownfish lay eggs on any flat surface close to their host anemones. Depending on the species, clownfish can lay hundreds or thousands of eggs. The male parent guards the eggs until they hatch about six to ten days later, typically two hours after dusk…and … in the wild, clownfish spawn around the time of the full moon!!