Soledad Navarro took this photo of the Juvenile winged pipe in the Clam area. It’s something you don’t see every day for sure. Here’s a bit of information on it. 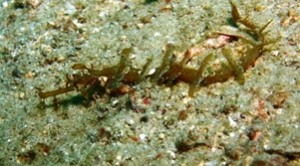 Also known as Ornate Pipefish and Whiskered Pipefish. Found singly or in pairs on reef flats and sea grass areas, among coral rubble and algae covered rocks. This Pipefish has flaps along the dorsal surface (back) of the fish and under the snout giving the fish an irregular outline. Skin flaps and wings are more exaggerated in juveniles. Varies in colour from place to place. They feed on tiny swimming invertebrates which they suck whole into their mouths. Length – 18cm, Depth – 3-25m, Widespread Indo-Pacific. Pipefish are like seahorses in that the male gives birth! The female deposits their eggs after fertilization into the males pouch to incubate the eggs for one month before giving birth.